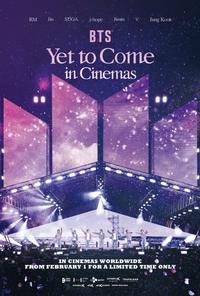 If you missed out on BTS‘ Oct. 15 show at Busan’s World Expo 2030 bid then you’ll have another chance to re-live the magic in early 2023. The K-pop superstars will release BTS: Yet to Come in Cinemas in movie theaters worldwide on Feb. 1.

According to a release announcing the movie, the footage from the concert has been fashioned into a “special cinematic cut, re-edited and remixed for the big screen,” complete with new close-ups and a “whole new view” of the entire show. The concert in front of a huge crowd in Busan, South Korea, featured the band’s members — Jin, RM, Jimin, V, J-Hope, Suga and Jung Kook — playing some of their most beloved hits, including “Dynamite,” “Butter” and “Idol,” as well as the first concert performance of “Run BTS” from June’s Proof album.

Showtimes for BTS: Yet to Come (VIP)