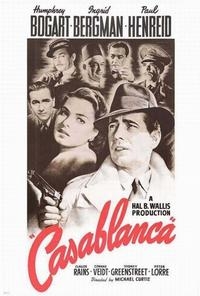 One of the most beloved American films, this captivating wartime adventure of romance and intrigue from director Michael Curtiz defies standard categorization. Simply put, it is the story of Rick Blaine (Humphrey Bogart), a world-weary ex-freedom fighter who runs a nightclub in Casablanca during the early part of WWII. Despite pressure from the local authorities, notably the crafty Capt. Renault (Claude Rains), Rick's café has become a haven for refugees looking to purchase illicit letters of transit which will allow them to escape to America. One day, to Rick's great surprise, he is approached by the famed rebel Victor Laszlo (Paul Henreid) and his wife, Ilsa (Ingrid Bergman), Rick's true love who deserted him when the Nazis invaded Paris. She still wants Victor to escape to America, but now that she's renewed her love for Rick, she wants to stay behind in Casablanca. "You must do the thinking for both of us," she says to Rick. He does, and his plan brings the story to its satisfyingly logical, if not entirely happy, conclusion.