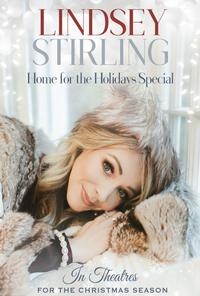 Stirling wanted to go bigger for Christmas. She’s done a holiday tour for the past three years, and it didn’t feel right to break that tradition — especially during a year in need of cheer. An in-person tour was off the table, but she also wasn’t interested in doing a livestream performance — “there’s no way you can really capture a live show and make it feel live and vibrant on the screen,” she said. Instead, the violinist decided to create somewhat of an extended, glorified music video with elaborate set pieces and costumes — elements that wouldn’t work in a live show because they’d take too long to remove or load on and off a truck each night. Doing this show on a budget, Stirling clocked 16-hour days for two months as creative director, designing the sets, sourcing the costumes and helping develop the choreography (including a performance where she hangs by her hair).