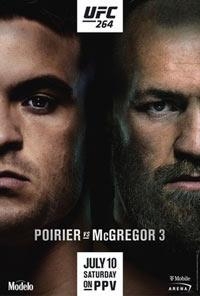 A lightweight trilogy between former interim UFC Lightweight Champion Dustin Poirier and former UFC Featherweight and Lightweight Champion Conor McGregor will headline the event. The pairing has previously met twice before: their first fight was a featherweight bout that happened in September 2014 at UFC 178, where McGregor won by first-round technical knockout. They then ascended to lightweight for an eventual rematch in January 2021 at UFC 257, where Poirier prevailed via second-round technical knockout.